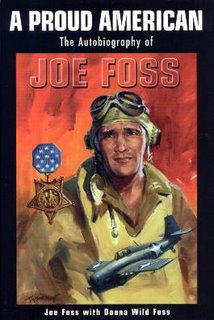 At the SHOT SHOW you can always find a lot celebrities visiting. Sometimes you can meet some amazing and remarkable people like this larger than life icon.

This is flying Ace, Joe Foss. During WWII Foss was a Marine Pilot in the South Pacific. Foss was awarded the Congressional Medal Of Honor after shooting down 26 Jap Zeros. After the war Foss was made a General who commanded the South Dakota Air National Guard, became a two-term Governor of South Dakota, the first American Football League Commissioner, outdoor TV host and he was a two-term President of the National Rifle Association.

Here is video of Joe Foss at the 2002 SHOT Show where he was the celebrity guest of the fine folks at The Blue Book Of Gun Values booth. That’s the publication that tracks the values of firearms for the collectors and traders.

Joe Foss was a good friend to gun owners and all Americans.